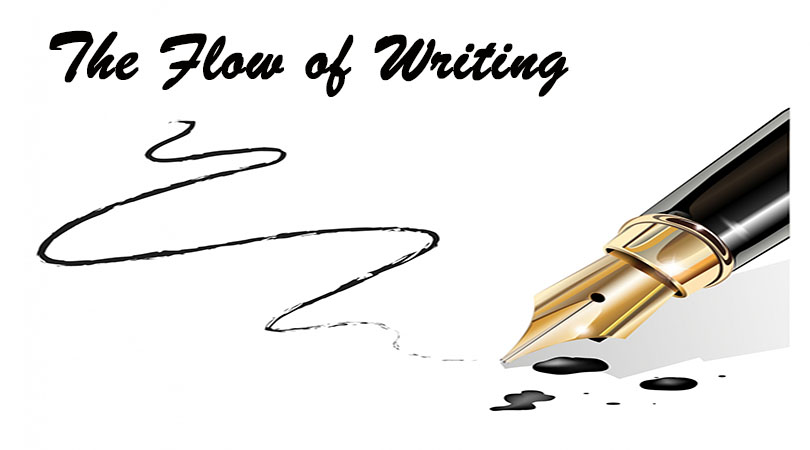 Editors, publishers, literary agents, and readers love edgy and quirky writing – but not at the expense of writing flow.
— Laurie Pawlik-Kienlen

Flow in writing is difficult to define, but readers always seem to recognize it. A flowing science fiction novel sucks the reader into the story, makes the unbelievable logical and prevents the poor reader from putting the book down until the last word passes into their brain long after dark.

So, if defining flow is difficult, perhaps the opposite is comprehensible. Choppy, telegraphic, terse, repetitive, dense, lean, or clipped are not terms of affection used by readers. You want terms like flowing, engaging, and lucid (see the example below).

Obviously, if you are going to create interesting and varied sentences, grammatical connectors are a necessity. Faculty at Michigan State University compiled a comprehensive list of connectors. Below is an abridged list:

Subordinate conjunctions
After, although, as, as if, as long as, as much as,
as soon as, as though, because, before, even if, even though,
how, if, in as much, in order that, lest, now, provided (that),
since, so that, than, that, though, till, unless, until, when, whenever, where, wherever, while.

Links to other blogs

Gabriel García Márquez won the Nobel prize for literature in 1982 after publication of his fantasy book “One Hundred Years of Solitude”.  Scholars praise the book for its long and flowing sentences.  Flow is hard to define, so here are a few sentences from the book to make the idea clear:

Many years later, as he faced the firing squad, Colonel Aurelaiano Buendia was to remember that distant afternoon when his father took him to discover ice.

He sent it to the government, accompanied by numerous descriptions of his experiments and several pages of explanatory sketches, by a messenger who crossed the mountains, got lost in measureless swamps, forded stormy rivers, and was on the point of perishing under the lash of despair, plague, and wild beasts until he found a route that joined the one used by the mules that carried the mail.

That spirit of social initiative disappeared in a short time, pulled away by the fever of the magnets, the astronomical calculations, the dreams of transmutation, and the urge to discover the wonders of the world.

From a clean and active man, Jose Arcadio Buendia changed into a man lazy in appearance, careless in his dress, with a wild beard that Ursula managed to trim with great effort and a kitchen knife.

Pietro Crespi was young and blond, the most handsome and well-mannered man who had ever been seen in Macondo, so scrupulous in his dress that in spite of the suffocating heat he would work in the brocade vest and heavy coat of dark cloth.

“You’re lucky because you know why,” he answered.  “As far as I’m concerned, I’ve come to realize only just now that I’m fighting because of pride.”

“You can tell me later,” she said.  “I forgot that today’s the day to put quicklime on the anthills.”

1 thought on “Keys to Improving the Flow in Your Writing”