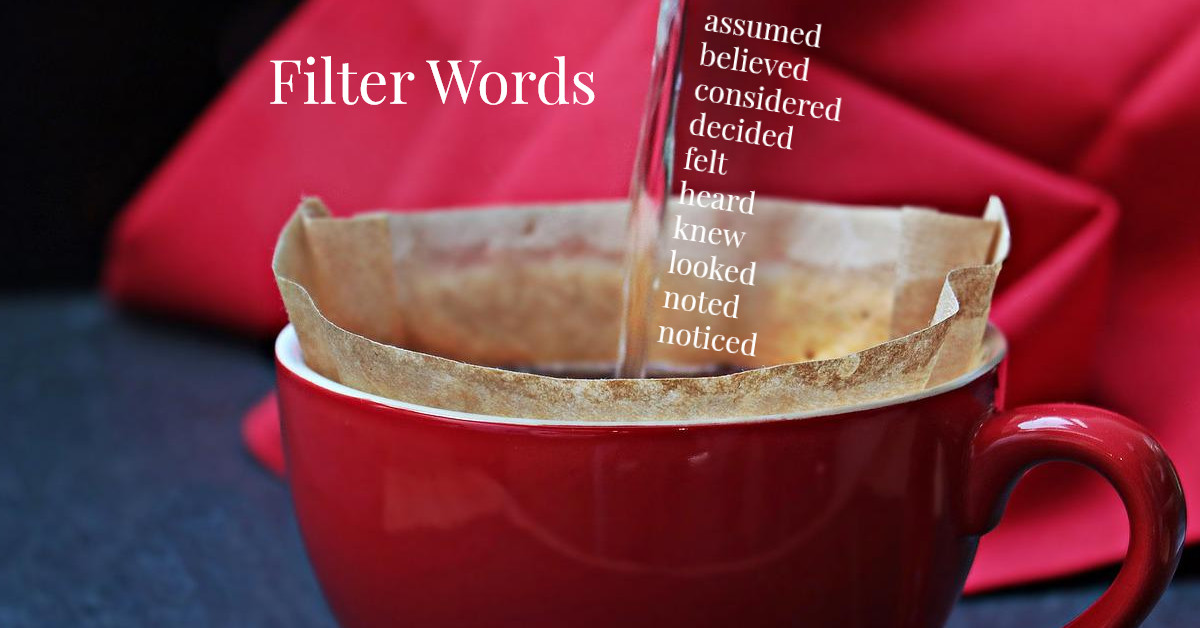 The most common stylistic problem I find while editing early drafts (both my own and those of critique partners) is excessive filtering and filter words. Filter words are terms and phrases that filter action or insight through a character’s point of view (POV). Overusing them is like asking your reader to watch your story unfold while looking through a dirty window. So, writing an immersive scene means the filter words must go.

What are filter words?

Which words are filter words? Well, there are lots of them, but prevalent ones are: assumed, believed, considered, decided, felt, heard, knew, looked, noted, noticed, pondered, perceived, realized, revealed, saw, seemed, sounded, thought, understood, watched, and wondered. There are loads of others, but are you seeing a pattern?

These zombie words crawl out of a graveyard of dead diction and eat the brains out of a story. Therefore, it is a good practice to avoid using them when possible.

As a “for instance,” I will borrow a line from a recent chapter I read for a critique partner. Fred is right in the middle of a killer, high-stakes scene where his protagonist, Emma, is setting off with her pack of wolves to rescue a missing friend.

He writes, “The pack discerned from Emma’s demeanor that this was a real mission, and she noticed their excitement.”

The Downside of Filter Words

I’m using this sentence as an example because it shows the three significant pitfalls of filter words: unintentional head-hops, deflating the action, and obscuring the setting.

When Fred tells the reader what “the pack discerned,” he is in the POV of the wolves. Within the same sentence, he jumps into Emma’s POV when she notices their excitement. It’s a textbook head-hop.

Fred misses an opportunity to show the reader more of this incredible pack of wolves he has created by telling the reader what they discern. And, when Emma’s reaction is confined to what she notices, her character lacks the color and texture of a physical presence on the page. By making a few modifications, Fred can pluck the reader out of his characters’ heads and put them right in the middle of the action. Here is an example.

BEFORE: “The pack discerned from Emma’s demeanor that this was a real mission, and she noticed their excitement.”

AFTER: Emma threw open the front door and threaded her arms through the straps of her backpack. The wolves stopped their playful romping and sniffed the air—each turned to Emma, their Alpha. Without a single command, they heeled to her side like a phalanx.

Can you see how these tweaks reorient the reader to be present in the scene?

Now, does this mean you should never use filter words? I’ve worked with critique partners who firmly believe all filter words are scene-killing zombies. I don’t see it this way. I read enough to know that many accomplished authors use them but do so sparingly. Sometimes, a filter phrase’s simplicity is the right choice. If a filter phrase can’t be written out of a passage without making the wording wonky or the phrasing forced, I say use the filter and move on. That said, taking the time to carefully consider their use is a surefire way to take your writing to the next level.

Kelly Sanford is a Royal Palm Literary Award-winning author who has been widely published in periodicals ranging from Showboats International to Billboard. She is a former yacht chef and lives in South Florida with her husband, daughter, and a special needs chocolate Labrador. With long-standing family ties to Alaska, and spending several weeks a year in the state, she calls Southeast Alaska an extension of home. When she is not writing, Kelly volunteers for Labrador Retriever Rescue and Project Monarch Health and supports the environmental protection and land preservation initiatives of the NARF. She considers social media a pernicious time drain, and prefers to allocate her time to family, writing, work, and volunteering—you will not find her on Facebook, Twitter, or Instagram.