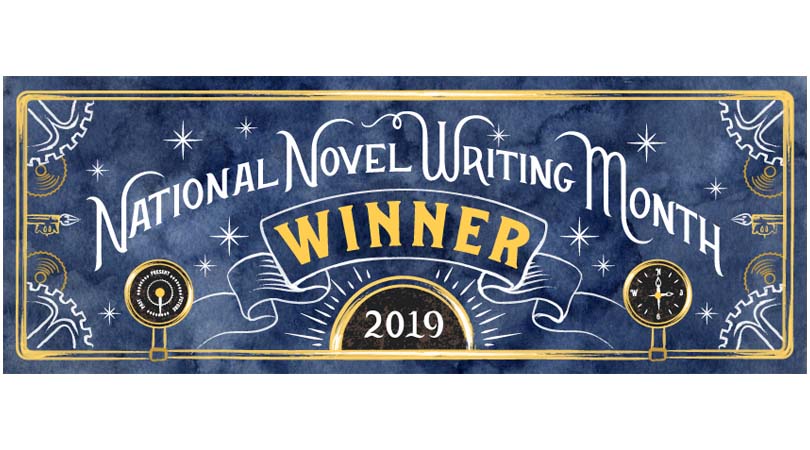 NaNoWriMo seemed intimidating. Until last month, I’d only written short stories. How could a hack like me possibly write a 50,000-word novel in 30 days? What if my story is pathetic? Can’t they schedule this for a month without a major US holiday?

Many of my writer friends were participating, but I heard my mother’s voice from beyond the grave. “If all your friends jumped off a cliff, would you do it too?” I felt like I was about to waste an entire month of my life by jumping off a writing cliff. It just seemed wrong.

This year, I ignored Mom’s nagging voice, blew the dust off that novel idea that had been simmering in the back of my cranium, and joined the ranks of the WriMos. While I ended up with a rough draft and 50% off my next purchase of Scrivener, the most valuable prize was the experience. Here are five lessons I learned.

I made the decision to participate three weeks before November 1, which left me little time to develop my plot and characters from my existing vague notes. As I frantically assembled a synopsis and character notes, I leaned primarily on two tools:

While three weeks might be sufficient prep time for a professional, it was not enough for a new WriMo like me. I would’ve preferred waking up November 1 with a 30 page synopsis and full character sketches. I came in with a two-page synopsis and hardly knew my characters. Next year, I’ll definitely do more advance planning.

Regardless, lack of planning didn’t stop me from reaching 50k. When unsure how to proceed with my story, I left a note to myself to revisit the scene later or wrote multiple versions of the same scene. November is for writing. There’s plenty of time to cleanup in December and January.

2. Writers are Supportive, Intelligent, and Creative

In The Shining, Jack Torrance spent the winter isolated in a mountain hotel banging away on a typewriter. That’s one way to write a novel. But I didn’t want to isolate myself or kill my family with an axe, so I used NaNoWriMo’s online discussion forums to communicate with other writers for support and encouragement.

WriMos are a fun and friendly bunch. Whether I was struggling with a plot element, looking for encouragement to help me reach 50k, or just after a good laugh, I found the forums to be an oasis of support and creativity in the vast social media desert.

A word of advice: After spending a few hours in the NaNoWriMo forums, don’t forget to write your novel.

3. Don’t Be Afraid to Write Crap

I’m a new writer. The rough drafts of my short stories are crap. (Okay, the finished drafts are crap, too.) Did I really want to spend a month writing 50,000 crappy words? Maybe I should wait until I’m a better writer.

Novels don’t materialize from a moment of inspiration and pixie dust. Most writers start with an embarrassing rough draft that requires months of revisions before it eventually shines. My completed rough draft reads like sludge. Fortunately, I can edit sludge. I can’t edit nothing.

Even if my NaNoWriMo creation never sees the light of publication, the experience still had value. I’ve learned a lot about creating a novel, and I’ll carry that forward to my next attempt.

4. Writing Is a Discipline

As a kid learning to play drums, I practiced every day. As a retiree learning creative writing, my approach has been considerably less aggressive. In my flawed thinking, I already knew how to write, and all I really needed was a good idea. The truth was that I had a lot to learn about writing, and every minute I sat around waiting for inspiration was a minute I wasn’t practicing and improving.

NaNoWriMo taught me to approach creative writing as I would a musical instrument–with daily practice. Now that I’m in the habit of writing everyday, it feels wrong to stop. Writers write, and NaNoWriMo got me writing.

All big projects look impossible before you start. But don’t listen to me. Here are a couple inspirational quotes by people with considerably more renown.

“In order to attain the impossible, one must attempt the absurd.” — Miguel de Cervantes

“To the timid and hesitating everything is impossible because it seems so.” — Sir Walter Scott

It is possible to write 50,000 words in a month. Ray Bradbury cranked out his 25k-word novella draft of Fahrenheit 451 in nine days, and I maintained a comparable pace, reaching 50k words in 20 days.

Here are some practical steps I took to increase my pace.

Once I turned off my internal editor and started writing with abandon, I achieved 2,500 words a day without a lot of effort. On my best day, I wrote 6,500 words before 3PM.

Writing a 50k rough draft seemed impossible before November. Now that it’s over, I’m surprised how easy it was.

As expected, my finished rough draft turned out to be crap. I’ll take a closer look at it in a few weeks. I don’t know if it’s fixable, but I’ll never know unless I try—just one more thing I learned from NaNoWriMo.

NaNoWriMo has other events throughout the year that I might participate in, including Camp NaNoWriMo in April. And I’ll be back next November for sure. You can send a buddy request to Genetix, and I hope to see you there.

Paul is a science fiction author, technology blogger, and former punk rock drummer. At age six, he saw 2001: A Space Odyssey on the big screen, which lead him to a collection of Clarke’s short stories and a lifelong insatiable appetite for mind-bending science fiction. Paul’s edgy, techno-smart stories were influenced by his career as a virtual reality software developer and the time he spent drumming for punk and alternative bar bands. He puts his protagonists in bad situations, then makes sure they end up worse off. Originally from Flint, MI, Paul resides in Colorado, where he tries to avoid reliving his punk rock days. He is still trying to teach his cat to play drums.