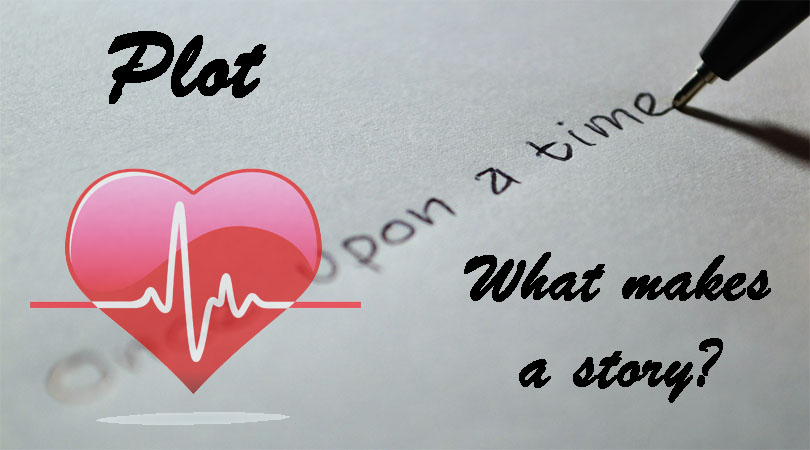 What allows an author to convert something familiar, important or truthful into a story that is interesting? Simple answer: a plot. A story is NOT your diary, your years working as a gallbladder surgeon or the truth that advertisements lie. Readers want a plot that pulls them from the beginning to the end with a sense of satisfaction.

Authors, whether they intentionally plan a story or not, often end up with similar elements of plot. This observation is true going as far back as Homer and Aristotle. Several modern authors have suggested plot formulas which are remarkably helpful to any fiction writer.

Gary Provost, a notable writing teacher, distilled his observations into a story in a paragraph. It’s been modified several times and is again modified here to remove the pronoun “he”.

Once upon a time, something happened to someone, and Hero (the protagonist) decided to pursue a goal. So Hero devised a plan of action, and even though there were forces trying to stop the plan, Hero moved forward because there was a lot at stake. And, just as things seemed as bad as they could get, Hero learned an important lesson, and when offered the prize so strenuously sought, Hero had to decide whether or not to take it, and in making that decision it satisfied a need that had been created by something in the past.

Unlike Homer, screenwriters are on a schedule to complete eight episodes a year which led Blake Snyder to publish his famous method in “Save the Cat.” Here is an attempt to reduce it to a paragraph.

The opening picture of the Hero’s world is stable until something happens which needs to be corrected. An acquaintance points out what Hero should do. An event catalyzes action that would lead to happiness, but Hero questions their ability to proceed. Hero makes a decision to move into uncomfortable territory and encounters a side issue (possibly a love interest). Many exciting trials and failures follow until a peak or false collapse happens which raises the stakes. Bad guys regroup and close in to isolate Hero who eventually comes to a point where everything feels lost, friends can’t help and death seems near. The side issue (or love interest) provides a solution. Hero dispatches the bad guys and the world is changed. In the end, the picture of the world proves real change has happened.

Dan Wells, a successful horror author, developed a 7-point plot structure that has gained popularity. He suggests the way to approach plot structure is to first decide on the ending . If the protagonist is strong in the end, they should be weak in the beginning (e.g. Harry Potter). Depending on the genre, the transition could be single to married, falsely accused to vindicated or poor to rich etc.

Make plot decisions in this order: A) the ending, B) the hook (action to grab reader’s attention, C) midpoint (where focus shifts from reaction to action), D) plot turn 1 (event that starts reaction), E) plot turn 2 (grasps victory from jaws of defeat), F) pinch 1 (something goes wrong), G) pinch 2 (something goes very wrong). Several try/fail cycles should happen in the middle of the story along with subplots.

Assemble in this order:

To start, Hero is in the opposite state as at the ending. Some conflict arises bringing a call to adventure and a decision with new ideas, people and secrets. Something goes wrong destroying the peace and causing bad guys to attack. Hero is forced to act and the villain is introduced. He makes several attempts to act, many ending in failure, forcing Hero to shift from reacting to threats to acting to stop them. Something goes very wrong, pressure builds, a plan fails, a mentor dies, and bad guys seem to win which places Hero in the jaws of defeat. Hero learns something, “the power is you”, allowing victory to be snatched from the jaws of defeat. Hero follows through on his initial decision resulting in a state opposite to the beginning.