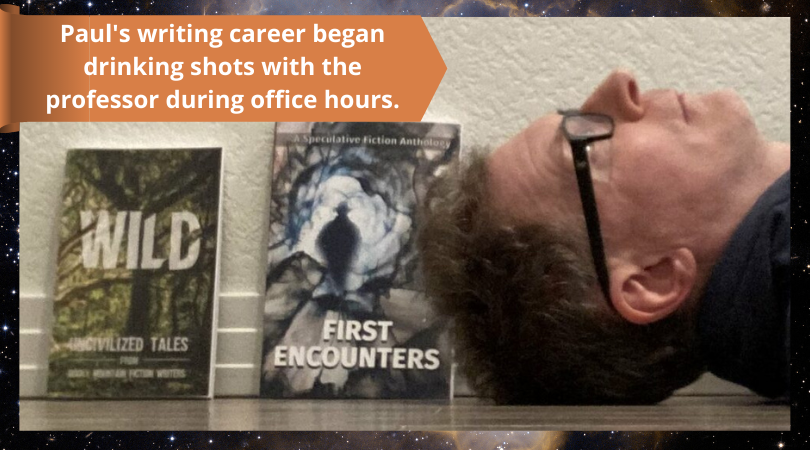 This week, we spotlight Paul Martz, a member of Spec Fic Writers Critique Group since 2018. Paul is a new writer, a retired computer programmer, and a former punk rock drummer. He has published two short stories. Jimmy’s Hat appears in the First Encounters anthology, and The Re-Creation of Sahmik Ghee appears in the RMFW 2020 Anthology Wild: Uncivilized Tales.

Legally blind from retinitis pigmentosa, Paul is an advocate for blind accessibility. He blogs at AppleVis.com, a website for vision-impaired Apple users.

SFW: Paul, welcome! You’re a new writer, but you’re retired. Did you write in your youth or did the writing bug come only during retirement?

Paul: Thanks! It’s great to be here.

I wrote my first science fiction in junior high, a plotless nuclear armageddon piece with cardboard characters huddled in bomb shelters. My teacher smiled and gave me an A. Good old Mrs. Hoyt! I took creative writing at the University of Michigan as part of my General Studies degree but was out of my depth. I remember drinking shots with the professor during office hours. He gave me an A but not a lot of constructive feedback. Any nascent creative writing skills I might have acquired certainly atrophied during my 30-year engineering career.

After working for the man, I scratched my head and considered what retirement might offer beyond the freedom to sit on my ass and eat chocolate. The dormant creative writing leech chewed its way out of my gut in late 2017. I’ve been writing science fiction short stories ever since.

SFW: And with some success. Tell us about your work. How much of the fiction you write is based on fact?

Paul: I try to stay current with the science world. Every time I learn something new, I jot it down in a note and hope it might come in handy in a future story. 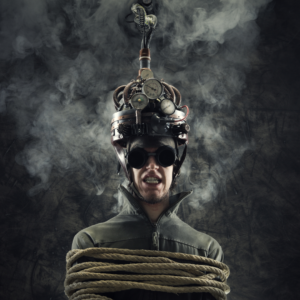 There is a real fungus called ophiocordyceps unilateralis. It infects ants and controls their every move. I wondered what might happen if it infected a human, and the result is my story Jimmy’s Hat. The main character is also based on reality. He’s a widower, a union member, and a regular at the local bar. That’s totally my dad.

SFW: What’s that story? Is it available anywhere?

Paul: It’s called The Blackest Ink. I hope to send it around for publication after I make some revisions.

SFW: How do you plan your stories? Do you plot everything out or do you fly by the seat of your pants?

Paul: I’m still learning how to develop and plan a story. I’ve tried plotting and pantsing, and both have their appeal. My engineering left brain wants a plan and a set of rules. My creative right brain wants to wander and explore. My punk rock brain doesn’t care whether I plot or pants, as long as my writing has some attitude and a healthy skepticism for authority. If the story I conceive satisfies all three brains, only then will there be peace within my crowded skull.

SFW: What are your reading habits? Any recent favorites?

Paul: I primarily read audiobooks due to my eyesight. By listening for a few hours each evening, I manage to finish a book a week. Science fiction and speculative fiction dominate my reading, but I also enjoy mainstream fiction and classic literature. Sometimes I read a book I remember from my youth, like Journey to the Center of the Earth by Verne or Pellucidar by Burroughs, just to see if I still enjoy it.

Lately, it doesn’t seem like I can get enough of the magical realism genre. I’m trying to incorporate this style into my writing, but I’m too inexperienced to pull it off. Along these lines, a recent favorite is Kafka on the Shore by Haruki Murakami. I love how the author brings disparate elements together into a cohesive whole.

I probably read as much non-fiction as fiction. In How to Create a Mind, inventor and futurist Ray Kurzweil describes a compelling design for implementing cognitive processes in software. Any science fiction writer dabbling in artificial intelligence should read it for research, along with the others Kurzweil has written.

I write a two- or three-line review for every book I read. You can see them at paulmartz.com.

SFW: If you could spend a day in any fictional world which would you pick?

Paul: So many possibilities.

If I went to the original Star Trek world, I’d want to be in All Our Yesterdays and go back to the ice age with McCoy and Spock. But with my luck, they’d give me a red shirt and kill me off in the first scene.

I’d rather go to the 2001: A Space Odyssey world. I want to be the primitive ape that beats the crap out of the other ape with a cave bear’s femur

SFW: Actually, I had books in mind.

Paul: Well, 2001 was based on an Arthur C. Clarke story, but yeah, you caught me thinking of the movie.

For books, it would have to be Bradbury’s Fahrenheit 451. In the conclusion, as warplanes streak the sky, Guy Montag finds a tribe of exiles who have memorized entire books. Let me spend a day hearing the classics from their lips as atom bombs fall all around us.

SFW: Paul, thanks for speaking with us today! And tell us how we can follow you.

Paul: It’s been a pleasure.

I’m on Facebook, Goodreads, Twitter, and my official website is paulmartz.com. Once this pandemic is over, you can find me at a random coffee shop somewhere north of Denver.

2 thoughts on “A Word with Spec Fic Writer Paul Martz”