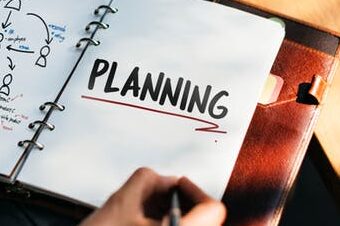 Why plan a story before writing? Because planning tremendously decreases the time needed to edit the story later.

The planning process and depth are different for every author. However, there are some good starting points:

Fantastic, you have started planning your novel. Record what you have so far. Decide if you are writing in 1st person or 3rd person.

Think about plot: trace the novel’s plot like inscribing a “W” — briefly tell the story to yourself:

Limit yourself to five main characters and write a short biography of each (with names) including strong personality traits for each. Other characters are “extras” that should remain one-dimensional and may be forgotten or “killed-off”.

Decide on the number of chapters. Forty is a nice round number, but it does not matter. The midpoint in the story would then be at chapter twenty.

Use your favorite method for outlining. In past years, “three by five cards” worked well. Now, electronic means for outlining are favored such as a spreadsheet or a graphic environment (like Scapple). Keeping the “W” in mind list the three acts, each with chapters inside. In a sentence, state what happens in each chapter.

The big step: put scenes inside each chapter and again write a sentence to say what happens in each and who is the point of view character. Most books have an inherent up and down from scene to scene — conflict followed by partial resolution followed by conflict followed by… Readers subconsciously expect this flow, so make it happen.

You now have your writing orders. Start at the beginning and write to the end.

Blake Snyder’s Save The Cat has helped many authors organize fiction writing to maximize reader impact. Here is a spreadsheet summary for 40 chapters in 300 pages.