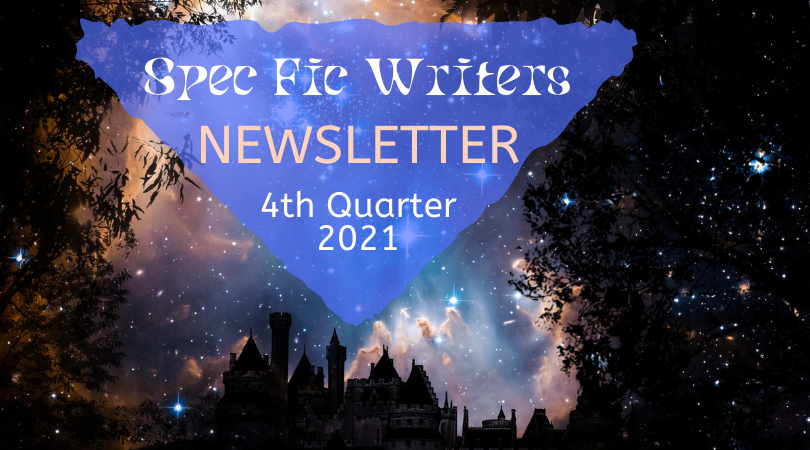 Welcome to our quarterly newsletter. Follow along with our members who publish in many of the speculative fiction sub-genres including: science fiction, fantasy, horror, dystopian, weird west, fairy tales and more.  Each newsletter will introduce you to a few of our members, recommend a book, and more. To be sure you don’t miss an issue, click here to register for the newsletter

Take your pick of maniacal Christmas bots, unexpected visitors from other worlds, omnipotent in-laws over for dinner, or a time travel mission gone terribly wrong.
Or perhaps you prefer festive androids, an unusual champion of might, genetic breakthroughs, or a celebration of a traditional nativity on a future colony.
Will you suffer holiday misery or enjoy the seasonal festivities? Do the spirits of Christmas bring loneliness and heartache, or cheer and laughter?
Whether you simply endure December or fully celebrate the holidays, this anthology of thirteen yuletide tales is sure to satisfy your speculative fiction craving and make your winter a little brighter.

The Doctor Is Out. . .to Write

Writer Cheryl Fallin’s journey to becoming a published fiction writer was a major change in her life, for she’d passed the previous years as a pediatrician. Think of a high-stress yet highly rewarding occupation, and few other situations can beat her medical specialty.

So what, then, could tempt her into a time-consuming, brain-intensive activity like penning novels? “It’s actually an escape from my daily work,” she says. “I see kids’ creativity every day”, and she realized she wasn’t using that side of her brain doing her job.

Cheryl certainly is exercising that organ nowadays, and as the winner of Rocky Mountain Fiction Writers Colorado Gold Rush Literary Awards in the speculative fiction category, she’s received validation of her talent and hard work. Her first novel Seraph, considered science fiction but certainly within the possible, introduces a high-tech machine some consider more suited to medical care of humans than people themselves.

This writer had credentials in writing before her new venture. Even in high school she loved creative writing and continued in college with a special interest in the works of Shakespeare. On the job, she co-authored a news column, “What’s Up, Doc?”, to answer questions about illnesses. For several years she wrote and produced a women’s ministry quarterly, with the involvement of parishioners.

“What if?” seems to be a common question to cross writers’ minds and inspire creativity. Cheryl’s thoughts turned first to cozy mysteries, but hearing a radio interview about robots in surgery tweaked her idea.

Fiction crept up on her. As she read authors like Michael Crichton, Robin Cook, and Tess Gerritsen, all medical doctors as well as writers, she thought, “I could probably do this; why shouldn’t I try?” By this point her two children, then moving through teen years, mired in science fiction and fantasy, also influenced her tastes.

The final impetus to put pen to paper, or fingers to keyboard, was the RMFW Speculative Fiction Writers critique group. “Having specfic people to encourage and help, that’s awesome,” she says, “like having our own coaches. You learn so much from others’ writing. Not just their comments and reviews of your writing, but how they evaluate their own work.”

With two short stories published in the group’s anthologies* Cheryl no longer is a novice. She finished Seraph and now is seeking an agent and/or publisher. Another option, and one increasingly chosen by newer writers, is independent or self-publishing. Undiscouraged with the amount of work and time that must be devoted to producing a novel, she’s received encouragement from agents she sent to. In the meantime, she’s continuing to create her second novel, a follow-up to Seraph. It won’t be long until this author is in to readers everywhere.

Who doesn’t love a good science fiction or fantasy subgenre? If you’re familiar with these categories, they can act as direct portals to stories you know you’ll love. And if phrases like “space opera,” “climate fiction,” or “urban fantasy” baffle you, worry not! Good Reads has your guide to ten crowd-pleasing speculative fiction subgenres, each with recommendations for recent popular books.

Laws, framed by unscrupulous leaders, diminish freedom. They can also be just, superfluous, or downright wrong. Second laws are (by design) less important than primary decrees. But depending on how regulations are ordered, the second law might be imperative for social stability, morality, or survival.

This collection offers ten original stories with diverse themes and bodies of law. They include these topics: corporate espionage remains rampant in the future, humans and robots swap identities, space pirates exact frontier justice at their own peril, greed and lust remain ingrained in humanity, teenagers fight robots for their freedom, an outbreak binds a couple together with the strong nuclear force, an immortal risks all for what is morally right, a drug-addicted man struggles to break his destructive cycle, aliens decide to assimilate into a Denver neighborhood, a necromancer hunter struggles between his duty for work and his family, soldiers fight off psycho fairies, and Greek Gods give a flawed man a chance for redemption.
Join the journey with these unsuspecting characters and discover if they learn from their encounters or suffer a tragic fate. Including imaginative stories from:
Kayelle Allen, R. C. Beckett, Matthew Cushing, L.V. Ditchkus, Cheryl Fallin, Liz Iozzo, Paul Martz, Vista McDowall, Apryl Newkirk, Bruce I. Schindler.

Readers often discuss Frank Herbert’s Dune in superlatives and hushed tones, with descriptors such as “greatest sci-fi novel ever written.” Yet would these same metaphors come into play if the reader/viewer only had experienced the new Dune super movie, stuffed full of special effects and wide screens as it is? As so often true in adaptations, the movie omits much of the novel’s plot and virtually all of the subtle character development and social insights.

But if you love quick cuts, special effects, bright lights, major battles, blowing and hazy atmosphere, and characters who function only in extremes, this is your film. It retains blazing hero young Paul Atreides and his mother, the mysterious (literally, her face cannot be viewed from behind a veil) Lady Jessica, introduces romantic interest, concubine and member of the Fremen (read “freemen,” get it?) Chani.

The planet is the only location where “spice” (an addictive substance that also provides some superhuman qualities such as precognition) can be found and is the reason for Paul and others to have emigrated there. Oh, just incidentally, Paul is being threatened by evil royalty. Described as a mythic and emotionally charged hero’s journey, both film and book insert tantalizing glimpses of Islamic, Zen, and Middle Eastern cultures. The story explores complex relationships between politics, religion, ecology, technology, and human emotion. Good guys and bad guys struggle to control the planet and its treasure while also battling giant “worms” adding another danger

The movie, like the book, is open-ended, leaving lots of potential for a series of films. If you like adventure and thrills visually you should enjoy it, If you prefer more mental stimulation, opt for the written word. For more information, see the websites. inked.

Ten stories of first encounters: a voodoo clarinet, a time travel sperm collector, aliens in a supermarket, the ghost of Jimmy Hoffa, feral vampires, a scientist inventing a new reality, and more… Venture into the unknown while reading these shorts filled with crazy science, magic, horror, humor, and suspense.

Presented by the Lightbringer Project and the Omega Sci-Fi Awards, the Roswell Award is an international short science fiction story competition that provides an opportunity for science fiction writers to imagine the future of humanity through excellence in storytelling. First, Second, and Third place Roswell Award winners will receive $500, $250, and $100 USD cash prizes. The Feminist Futures Award co-presented by Artemis Journal is an additional special prize category for a feminist themed sci-fi story.

SpecFic in the News

John M Campbell of Denver, author and aerospace engineer, was interviewed by Central Park’s Front Porch News upon winning first place in the fourth quarter 2021 competition of Writers of the Future anthology. This contest provides is an opportunity for new writers of science fiction and fantasy to have their work judged by some of the masters in the field and discovered by a wide audience. The Tiger and the Waif, Campbell’s story, asks: Can they become like us? Can an Artificial Intelligence [AI] learn to love?” ) See Front Porch  July edition. To follow Campbell or learn more about his upcoming publication—which will be available for purchase on Amazon—visit his website. Entries are adjudicated only by professional writers. Prizes of $1000, $750 and $500 are awarded every three months.

Tidbits you can sprinkle into your communications will make you seem to be an experienced explorer in our worlds This new website, a work-in-progress, guides readers through a comprehensive, quotation-based dictionary of the language of science fiction: sfdictionary.com.
EXAMPLES:
· antigravity n.; (also) a device that negates the force of gravity
· biopunk n.a subgenre of science fiction which focuses on the societal effects of biotechnology and genetic engineering
· corpsicle n. a cryogenically frozen person; someone in cold sleep n.; (also, occasionally) a frozen corpse

The official name of the SpecFic writers’ group, which holds weekly critique sessions and sponsors anthologies, is the Speculative Fiction Writers of the Rocky Mountain Fiction Writers. The website is specficwriters.com. Our members come from across the US, well, at least several states in addition to Colorado. You’re invited to sign up for our free newsletter, join the group if you’re a writer, and, of course, purchase our work.

Tenacity is responsible for the successes in my life. Since fifth grade, I’ve been determined to be a writer, when I submitted a poem to the Saturday Evening Post (it was immediately rejected). Thousands of rejections along with some acceptances taught me the craft, and after decades, I decided to follow my passion, fiction writing. My recent novels are proof of my persistence.

Simultaneously, I’ve been a free lance writer with publications in local, regional, and specialty publications for news and features. A secret love—live theater, and had I been seven inches taller and 30 pounds lighter, I might have been an actress. For years, I entered recipe contests and was once a finalist in the Pillsbury Cook Off.