Okay, I admit the title for this post is a little dramatic. So far we’ve been touting the importance of running your work through a critique group. Now I make them sound like a house of horrors. Know that this post isn’t meant to scare you away from critique groups. Mainly, it’s important to understand the choices you’ll face and the issues you’ll encounter as a member, which will ensure you join the right group in the first place.

Some critique groups are comprised of members who write in many different genres. Others have chosen to only include writers of specific genres. As you can see, we are a bunch of Speculative Fiction writers, which was my choice when establishing the group due to my experiences with the multi-genre format. I had grown increasingly frustrated with critiquers who said they didn’t like fantasy and horror, and their comments were sparse. Don’t let my experience sway you away from a diverse group. There are plenty of writers who will provide constructive criticism no matter their preferred genre. For example, most stories include steamy and sexy scenes. Who better to help you learn to write them than a romance writer.

There’s NO Room for Egos 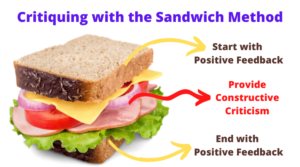 Criticism is difficult to take in large doses. That’s why you must find a critique group with strong moderators and a balance of positive and negative feedback. It’s best if everyone uses the Sandwich Method, which includes a rotation of positive, negative, positive as shown below.

Heck, a good group will sometimes encourage only the positive. Imagine a session of dwelling on only what your critique partners like about your story. Think you might write more that week?

It’s a Commitment of Time and Energy

When you join a critique group, you are committing to at least three hours a session to help yourself and fellow writers. It’s important to attend regularly (typically weekly or semimonthly) to keep up with story lines. In the end, it’s all worth it because critiquing other’s writing will greatly improve your own. So expect to pencil in your time and make your critique group a high priority.

Kick Hostile Members to the Curb 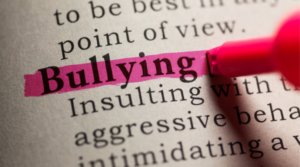 Encounters with hostile members is inevitable within any critique group. Or situations where one writer tries to dominate or single out another. This should never be tolerated! Again, strong moderators will keep the peace in these situations. Worst case, they’ll throw the bully’s butt to the curb. Know that it’s necessary to audit potential critique groups, one or more times, before committing to join their forum. This will give you a chance to see how the writers interact, the more jovial the better.

Everyone feels awkward when they join their first critique group. Existing writers already know each other, and some members are more tight-knit than others. Like any new situation, it takes time to adjust and open up whether you’re new or senior. In my opinion, writers are some of the most lovely people you’ll ever meet. We know best how to lift each other up during times of self-doubt. And, boy oh boy, we writers go through a lot of ups and downs. Remember that we all remember what it felt like to be a new writer. Give it time. Soon you’ll want to attend sessions for both the constructive criticism and moral support.

Critique groups are like revolving doors. Some writers never return after auditing their first session. Some writers attend sporadically. Some writers faithfully attend every meeting. And some writers attend for a while, then disappear. This may seem unsettling and unstable, but it’s driven by a combination of criticism and writers progressing within their career. Trust me. You’ll get used to it because there are always new writers lined up to join, and there’s a certain satisfaction in helping them progress to published author.

Now get out there and find your tribe!

Wendy Spurlin is the founder of the Spec Fic Critique Group and moderates most of the critique sessions. She leads OTI Press, the publisher of the group’s anthologies, and she has recently returned to school to study graphic design and marketing. In addition, Wendy has a passion for horror movies, zombies, wine, and evil in pop culture. Originally from Chicago, she now lives in Colorado where she spend her days writing, studying, and being manipulated by 2 mischievous beagles.

Publishing under the name Winnie Jean Howard, she writes dark comical stories for all ages. Looking for a short, funny tale.? Check out Pete Sinclair’s story in the Fall for Freedom prequel to The Courier series. He’s been blamed for closing the Gates of Hell and releasing an imprisoned fallen angel by the name of Azael. Lucky for Pete, an angel’s apprentice believes he’s innocent. She offers him freedom from Satan’s forces in exchange for his help returning Azael to his prison cell. If only he and the demon who possesses him had the courage and know how to fight a fallen angel. Buy on Amazon